Odds are, if someone asked you to name the top five most famous beaches in the world, two names near the top of the list would be Copacabana and Ipanema. Justifiably so. After all, Copacabana is credited as being the birthplace of the bikini and Ipanema, well, who can’t at least hum the chorus to the Jobim/Morais masterpiece, “The Girl From Ipanema" that single-handedly put Bossa Nova on the world map of musical genres? What’s really amazing is that both of these beaches are in the same city! Indeed, this could only occur in the hedonistic beach culture of Rio de Janeiro.
With an estimated population near ten million people, Rio has most of the things that go along with a city of that size anywhere in in the world, i.e. traffic, etc. However, two things that really set Rio apart from any other urban metropolis are it’s stunning geographic beauty and the “Cariocas" (Residents of Rio) belief that leisure time at the beach is a birthright. Wanting to illustrate this uniqueness I headed down to Arpoador, which is the rocky outcropping that separatesIpanema and Copacabana. This turned out to be a good choice because not only did it afford me this beautiful view looking all the way down Ipanema Beach to it’s spectacular mountainous end, it also had plenty of locals engaging in their favorite seaside activities. Whether it was working out to maintain their “body beautiful”, surfing or in the case of these four men, fishing right off the rocks into the ocean. Facing West in the late afternoon gave me the opportunity to silhouette the men, thus turning them into the representative “everyman” and the perfect composition to illustrate the lifestyle of this unique mega-city. 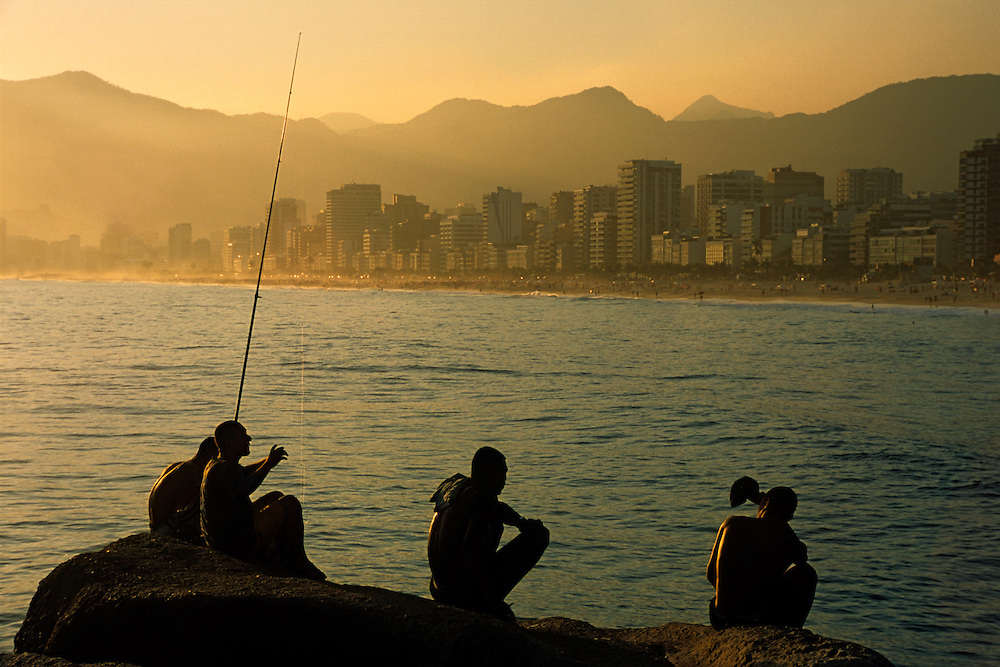